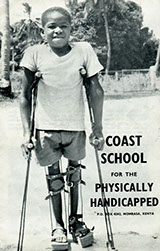 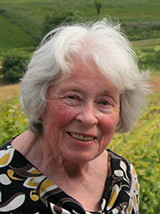 History of the school

Started in 1965 as the "Coast School for the Physically Handicapped" by Miss Margaret Bridgewater (the later Mrs Margaret Beetham), an English Methodist, the school over time has developed into a mixed (boys and girls) boarding school under the auspices of the Methodist Church of Kenya. 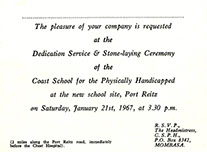 From the first 9 children with polio related physical handicaps, being taught in a church building, the school rapidly developed as of 1971 on a government donated site with its own buildings, into a boarding school with already 175 pupils in 1990. Different from the early beginnings, the school started accepting pupils with also other than physical disabilities.

By 1991, due to continuing worries over funds for the daily running of the school, it became an integrated public school, in which the handicapped children learn together with the regular non-handicapped children. The government pays for most of the teachers, and gives a grant for school meals. Over the last couple of years the average enrollment has been 165 - 185 boarders and about 100 day school pupils.

In October 2015 we celebrated the 50th year anniversary with three days of festivities, for which we invited alumni, (former) teachers, staff and board members as well as guests from the community and donors.

Our school  is still the only primary school of its kind in the Coast region of Kenya.